On August 28th, I arrived in Yerevan, Armenia for the first time since the summer of 1977: Then via Beirut, now via London; then to a Soviet Republic, now to a vibrant, complex independent state; then after living in Yemen for the year; now from my home in the mountains of Vermont.

After a year of teaching school in Yemen, where fresh fruits were limited to imported oranges, mealy red delicious apples, local limes in abundance, and the occasional watermelon, I still remember the luscious strawberries of Beirut. But it wasn’t till Armenia that I tasted the intense golden sweetness of my first fresh apricot.

The flight from Beirut to Yerevan, on Aeroflot of course, was filled with diasporic Armenians, most of them fleeing some sort of political upheaval in the lands in which they hand landed. Lebanon, Ethiopia, Iran. Throughout the flight, the engines roared as though they were a little closer to the inside of the cabin than usual. Water dripped from the sloped ceiling. Massive Russian stewardesses shouted in their mother tongue at passengers, who wandered freely around the cabin, lit cigarettes in hand, despite seatbelt signs that were also lit. 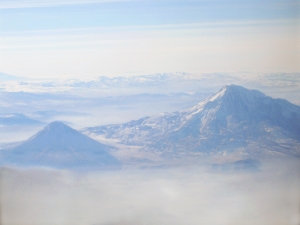 As the peak of Mt. Ararat ascended toward us, all passengers rose from their seats to dance in the aisles and celebrate their homecoming.

The British Midland Airways flight, from London to Yerevan to Teheran, was so empty and quiet, that each passenger could spread out across three seats. Seatbelts were fastened even when lying down. Tea was served. The sparkling new Zvartnots Airport passenger terminal, built thanks to Argentinean investors, gave me the first inkling of how profoundly Yerevan had changed. But meeting Catherine Yesayan, my good host these past few weeks, at the “Black Cat” in downtown Yerevan, was like stepping into a dream.

The Black Cat— “Gatto”—is a 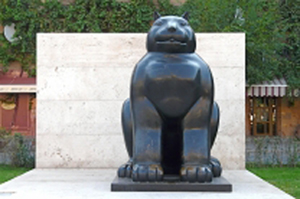 sculpture by Columbian artist Fernando Botero (b.1933), installed in the sculpture garden of the stunning Cafesjian Center for the Arts, a complex that begins at street level with two blocks of sculptures surrounded by arabesque plantings and fountains, and then continuing as a massive stone staircase with sculptures, gardens, and fountains rising hundreds of feet up the adjacent hill. Construction of the “Cascade” (Kas-cad) began in the 1970’s under Soviet rule but the project was never completed as the U.S.S.R dissolved. In 2001, Gerald Cafesjian began transforming the grounds and the space behind the massive staircase into the exceptional museum that it is today.

I have come back to the ancient land of Armenia, as a Fulbright Scholar, to make art and write stories about the experience of growing old in Armenia. What luck to landed in a museum “dedicated to bringing the best of contemporary art to Armenia and presenting the best of Armenian culture to the world.”

When I climb the steps of the Cascade each morning, to see Mt. Ararat, beachhead of Noah’s ark, rising in the sky beyond Yerevan, I float between the old and the new. 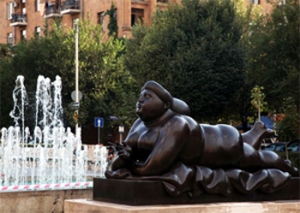 Another woman, had  arrived at the Cascade just before me: Botero’s “Woman Smoking a Cigarette.” Built like a stewardesses from that 1977 flight, she lies nude on her onyx black stomach, looking out over her cigarette at the Armenians who surround her, all of them with ready opinions.

Catherine and I joined them before going back to her apartment where she had a bowl filled with the last golden apricots of the season waiting for me.